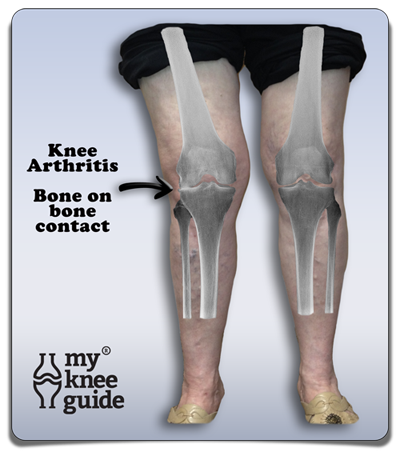 Once an injury occurs, the well balanced hinge motion of the knee becomes compromised. Over time this begins to wear down the normal cartilage of the knee and arthritis ensues. The knee may become angulatedangulated due to greater wear either on the inside or outside of the knee, similar to Joanne's knee. The knee may also develop bone spursbone spurs as a part of arthritis development.

A significant injury such as a fracture can cause direct cartilage injury or may cause poor alignment of the bones leading to accelerated wear. The body has a very limited ability to heal injuries to cartilage due to a poor blood supply to this area.

As part of the arthritic process, the body will commonly create swelling in the knee called an effusion. This swelling can change in size depending on activity level. The knee can hold up to a ½ cup (120cc) of synovial fluid. Sometimes the swelling can be controlled with ice packsice packs or NSAID medicinesNSAID medicines. Sometimes the surgeon will remove the fluid with a needle and inject cortisoneinject cortisone, which is a powerful anti-inflammatory medicine. 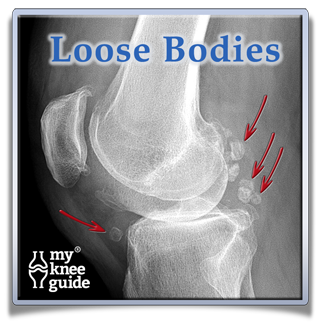 As arthritis progresses, It is common for pieces of cartilage to become unstable and break off of the end of the bone. These pieces can float around the knee joint. This is called a loose body. These loose bodies may calcify and show up on an x-ray as shown here. Sometimes they will get buried in the lining of the joint or may get wedged into a small crevice of the knee. When this happens, they may not cause significant symptoms. However, if they continue to move around the knee, the loose bodies can get caught between the moving bones. This may cause a locking or catching sensation. Removal of a loose body is one of the limited indications for performing a minimally invasive arthroscopyminimally invasive arthroscopy on an arthritic knee.

Osteoarthritis is usually classified as "wear and tear." However, there is increasing evidence that genetics and low level inflammatory factors also contribute to the development of knee osteoarthritis. 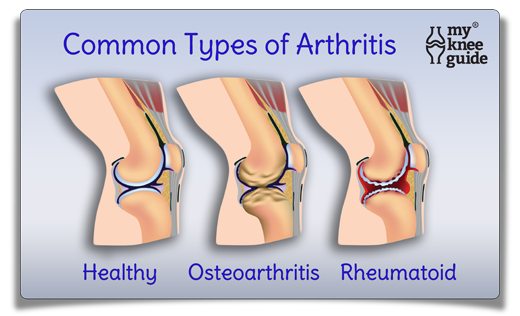 As opposed to osteoarthritis, there are also some other well defined arthritic diseases that have a high level of inflammation. Some examples of these are rheumatoid arthritis, gout and psoriatic arthritis. Inflammatory arthritis occurs when the body attacksitself and destroys the joint.

Rheumatoid arthritis is diagnosed from x-rays, blood work, physical exam and an evaluation of the patient's medical history. Patients with rheumatoid arthritis, tend to have knee x-rays that reveal more diffuse, symmetric narrowing and cartilage loss when compared to osteoarthritis. Blood work can be used to evaluate for generalized signs of inflammation and disease specific components such Rheumatoid Factor. Rheumatoid factor is an antibody directed against an individual's own body. However, the diagnosis of rheumatoid arthritis is not made by blood work alone. There are many clinical factors that need to be met prior to making this diagnosis which should be determined by a rheumatologist. 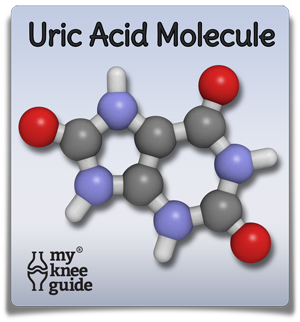 Gout is most commonly manifested in the great toe, but can affect the knee joint as well. Gout occurs when uric acid crystallizes into monosodium urate and deposits in joints. Frequently, gout can be diagnosed by sending fluid from the knee to the lab to evaluate for specific looking microscopic crystal deposits. Blood work to evaluate the uric acid level may be requested by your physician. However, elevated blood levels of uric acid is not specifically diagnostic and these levels are not necessarily elevated during a gouty attack.

Treatments for a gouty flare in the knee typically starts with the use of an NSAID (anti-inflammatory)NSAID (anti-inflammatory) such as indomethacin (Indocin®). Indocin® 50mg may initially be given three times per day and then reduced or stopped after the flair up has subsided. Another medicine, colchicine, can be used to reduce the symptoms of a gout attack since this medicine inhibits many of the inflammatory chemicals produced by the body during a flair up. Sometimes steroids taken by mouth or injectioninjection can be helpful as well.

Once the initial attack has subsided, some patients will be placed on a routine dose of colchicine or allopurinol to help prevent further flair ups. Allopurinol is most effective in patients who have known elevated levels of uric acid within the blood. Allopurinol should not be started during a new gout flair up. Patients who suffer with gout may also consider limiting their intake of foods high in purine content foods high in purine content and also limiting their alcohol consumption.