Many patients have symptomatic arthritis in both knees. These patients may consider having both knees replacedknees replaced during a single operation. There are some advantages to this including patient convenience and less total time recovering. It has been proven that patients who undergo both (bilateral) knee replacements at the same time have the same success rate and no increased failure rate of the replaced knees. In this picture, Joshua has severe arthritisarthritis of the inside of both of his knees, leading to bowed legs. Joshua is considering his options for having both knees replaced at one time. 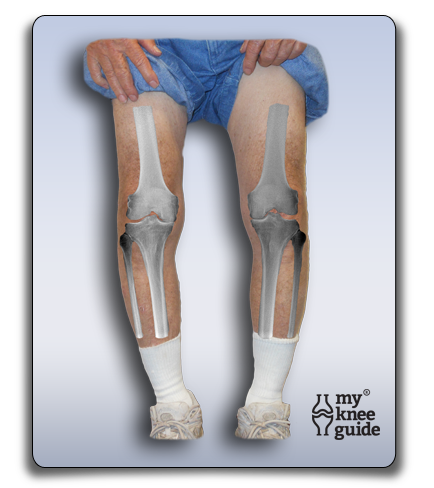 Patients who have both knees replaced during a single surgery have increased rates of blood transfusions. There is almost a two times increase in the incidence of developing a blood clotblood clot that goes to the lungs (pulmonary embolus).

The risk of cardiac complication, such as a heart attack, is 60% greater after simultaneous bilateral knee replacements. Additionally, there is an increased rate of mortality in this group of patients. Despite these risks, there are many successful uncomplicated bilateral knee replacements performed during one single surgery. These risks must be weighed against the benefits when considering having both knees replaced during a single surgery. Patients who are at increased risk for cardiac or pulmonary complications may want to consider waiting 3 months or more before proceeding with the second knee replacement.

Replace Both Knees During Same Surgery?