Proper wound healing is critical to the success of a knee replacementknee replacement. It is important to keep the wound clean and dry during this time. Each surgeon will have a slightly different way to manage a post-operative wound. Find out from your surgeon their specific protocol for wound care.

After surgery, the knee will be swollen, and may remain swollen for many months. There may have been a drain placed inside the knee during surgery which is generally removed after 1-2 days. It is common for there to be diffuse bruising of the skin which looks like a typical “black and blue.” This bruising may be seen all the way from the thigh down to the toes. 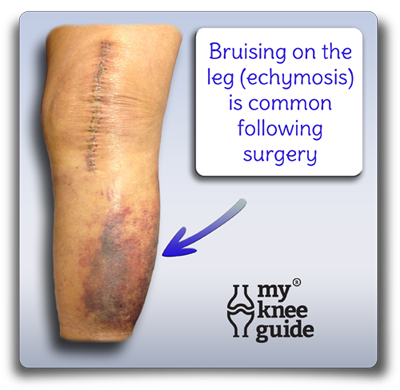 Occasionally, the knee may have drainage from the incision line for a couple of days. This drainage will usually look like diluted blood. If the drainage lasts much longer or changes into grayish, foul smelling fluid then an infection may be developing. A small amount of redness surrounding the incision line is normal.

However, if this redness enlarges or becomes particularly tender then it may be a sign of infection. The earlier a problem is treated, the less likely it will turn into a major issue. Refer to the infection moduleinfection module for more information. 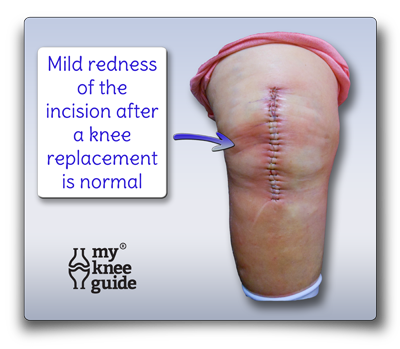 Some surgeonssurgeons will close the knee with dissolvable stitches; other times the sutures may need to be removed. If surgical clips (staples) were used for closure, these will generally be removed 7-21 days after surgery. Most surgeons will allow showering at this stage. However, it is important for the knee to have completed the initial healing before submerging it in water, such as taking a bath. This typically will happen about 4-6 weeks after surgery.

Some surgeons will recommend certain creams, lotions or ointments to be used after the wound has completed its initial healing (typically 4-6 weeks after surgery). These topical products may help with the appearance of the scar. If an over-the-counter product is going to be used, then look for ingredients containing vitamin E or cocoa butter that can moisturize and potentially produce a better cosmetic scar. 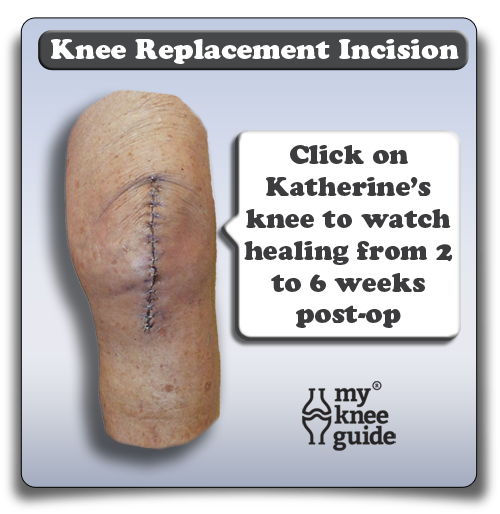 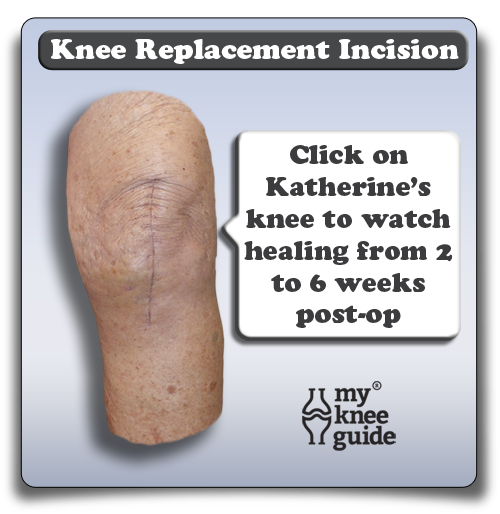 It is common for the incision to itch. This is a normal part of the healing process. Some options to help reduce this symptom include the use of Benadryl® or other over-the-counter oral allergy medicines. Once the incision has completed the initial healing, it is also permissible to use a topical hydrocortisone cream to help with itching.

After this time, the wound will slowly change and re-model itself until complete healing happens over several months. It is important to keep the incision away from sunlight during this period of time after surgery. This can be accomplished with the use of pants/dresses or sun tan lotion depending on the patient's particular climate. Remember to only use sun tan lotion after the incision has completed its initial healing. Refer to Katherine's knee incision at 6 weeks after surgery to see this. Typically the incision line will remain a pink or red color for several months. This will usually turn whitish or tan/brown as time goes on.

The entire knee will remain warm for several months after surgery. This warmth is due to the increased blood flow to this region during the healing process. As long as this is not associated with significant or worsening pain, then it is normal.

Infection - An Uncommon but Serious Complication

The Wound After Knee Replacement Surgery