In the first edition of this two part blog "Return to Work after Knee Replacement – Timeline and Challenges", we focus on the orthopedic surgeon's perspectives. We outline the typical time to return to work and discuss the success rates of patients returning to their previous jobs. For this second edition of our blog, we hit the digital streets so to speak. We asked several of our My Knee Guide Twitter followers to describe their own journeys back to work. Their experiences will enlighten from the perspective of patients who have gone through this voyage. 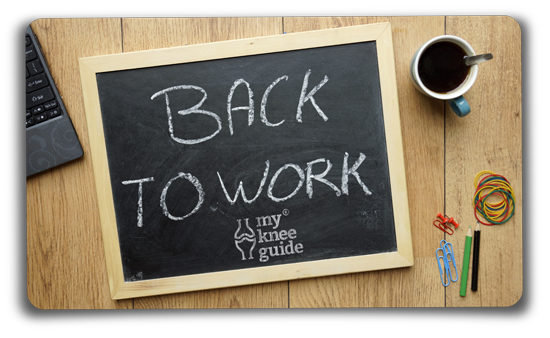 I concentrate my practice in Oil and Gas, Real Estate and Environmental law. Depending on the type of work I’m doing, I can spend all day at my desk, or I can spend a week or more at a time research real estate records in County courthouses.

My need for knee replacement surgery arose from an anterior cruciate ligament (ACL) reconstruction I had in 1981. I did not regain my full range of motion at that time, and in the 34 years that followed, my knee accumulated scar tissue and became arthritic. I’ve known for several years that I needed a knee replacement, and actually scheduled one in 2011, but backed out due to pressing work issues. Finally, I decided this year that there would never be a good time to do it.

When I first began contemplating total knee replacement, the doctor told me I would be off work for six weeks. There was no way I could miss that much work. I subsequently spoke with several friends who had done it. One was a lawyer who was much older than me who was back in his office, although in pain, the week after surgery. I talked to another friend, also a lawyer, and about my age, who was able to return to work after 11 days. I thought that if they could come back that quickly, I could too.

I had a total knee replacement on June 30. After surgery, both of the doctors who worked on me said it was a very difficult knee to work on due to the scar tissue. It wasn’t tremendously painful, but all of the advice I heard was to “stay ahead of the pain” with ice and medication.

I arranged to have my work computer at home the first full week after surgery but did very little work that week. On July 13, I returned to work for the day because I had a couple of previously scheduled meetings to attend. It was a bit of a nuisance to arrange to have my knee propped up in a conference room full of people, but I did attend the meetings. After a long, tiring day, I decided that I would play it by ear the rest of the week regarding a return to work. As it turned out, I did not return the rest of the week, although I was able to do a few things at home on my computer. I was able to “farm out” work that I otherwise would have done in the courthouse.

I returned to work for six hour days beginning on July 20th, twenty days after surgery. I arranged my office to have a chair with a pillow on it next to my computer desk, so I was reasonably comfortable while working on my computer. I noticed that the knee would not be comfortable unless it was raised to at least waist level. Otherwise, I would suffer significant stiffness. I made an icepack using rubbing alcohol and water that I would apply multiple times a day during work.

I also would take time out during the day to do flexion and extension exercises. I don’t get a lot of visitors, so I could lay down on my floor to do some of them. I would also take time to ice after every exercise break.

The next week, on the 27th, I was back to full time in the office. Three times a week I would come in after physical therapy. The only problem with that is that I would sometimes be late back to work. The biggest challenge I faced, by far, was maintaining a comfortable position to work on my computer with my leg propped up. It helped to enlarge the type on my screens and set up a little further away than normal. If I failed to keep my leg propped for very long, it would start to swell and become painful.

I really didn’t feel like I could afford to take additional time off, but I would rather have spent more time with my leg elevated and concentrating on regaining range of motion. I’m still making progress, but not as fast as I would have liked.

I would advise someone returning to work after total knee replacement to be flexible with their schedule. You don’t know how difficult it may be, so leave open the option of leaving early or coming in later. Also, try to avoid long car rides at first, those can be quite uncomfortable. And prepare for the same regiment you do at home. Make an ice pack with water and rubbing alcohol and keep it in the freezer, if you have access to one. Working at a desk all day is great for icing. 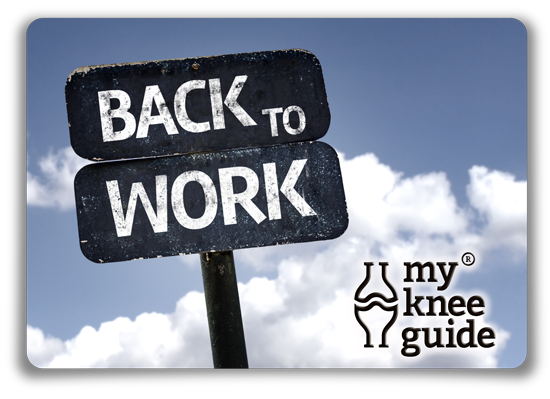 L. Humme is a 57 year old who lives in the suburbs of Chicago

I had total knee replacement surgery (left knee) on June 26, 2015. I enjoy my profession in non-profit philanthropy so I was anxious to return to work following my surgery. I am fortunate in the fact that my employer allowed me to conduct business out of my home on a part time basis three weeks post op.

So, for that first week I set up shop around our dining room table. The challenges that I faced prior to returning to work were the same challenges I faced sitting around the dining room table - swelling of the knee, calf and ankle (I had a Baker's Cyst in my surgical knee that decided to return following surgery), stiffness of the knee, and finding motivation to do physical therapy. I placed another dining room chair right next to my chair - put two pillows on top of that chair and hiked my surgical knee high atop that fluffy white mountain.

While I did my computer data entry or made phone calls, I continued to do my foot and ankle pumps (which help keep the swelling to a minimum in the lower leg) and periodically would bend my knee upward being mindful of physical therapy expectations. I was able to return to work full time one week later - four weeks post op. Except this time it was not in my dining room but rather in my office. Once again, I did PT while sitting behind my desk and was very intentional about getting up every 30 minutes to walk around the office so as to stretch the knee as much as possible.

Two weeks later - now six weeks post op - I was able to make my first out of town business trip; a three hour car ride, three days out with donors and then the return trip. Again, the challenges I face today (six weeks out) are the same challenges I faced immediately following surgery, sitting around the dining room table or in my office - swelling and stiffness. I am now in the practice of icing and elevating whenever and wherever possible. Physical therapy is done either in my PT's office, at home, or in the fitness center of the hotel.

My biggest challenge through all of this has been finding ways to sleep. I found that Norco gave me insomnia so I stopped taking all pain medication after three weeks post op. I compensate for this challenge by spending most nights in my recliner or trying to convince myself that "sleep is over-rated". This, too, shall pass.

Mich&egravele L. is a 49 year old living in Ontario Canada

I describe myself as a fabulous 49 year old white female, live on my own, work for the federal government for 30 years and have no kids.

After having total knee replacement surgery, I have to say that my journey was hard. I was thinking four weeks recovery should be enough, but I ended up on pain killers for seven weeks. I was able to get my leg straighten at zero degrees in five weeks. However, the bending is still a work in process. At nine weeks, my bending is at 105 degrees.

I work in client services and dissemination. I was able to return to work ten weeks after surgery. My biggest challenge with returning to work is that I cycle to work. This was especially difficult since my bending still needs work. I tried to overcome this challenge by cycling weird. It would also take me some time to warm up.

When I returned to work, I initially went back full time rather than starting part-time. My advice that I would give to others going back to work after knee replacement is to listen to your body. Also, I would recommend that a week before returning to work is to start your work routine to become more accustomed.

Return to Work after Knee Replacement – Timeline and Challenges

Driving - When is it Safe to Drive after Surgery?

Tweet your comments about: Return to Work after Knee Replacement – Patients Perspectives