After knee replacement surgeryknee replacement surgery, it is important to regain the motion in the knee to re-establish good function. Your participation in a home exercise programhome exercise program is critical in this process. Most surgeons in the United States (as opposed to other regions, such as the U.K) will also rely heavily on outpatient physical therapyphysical therapy. 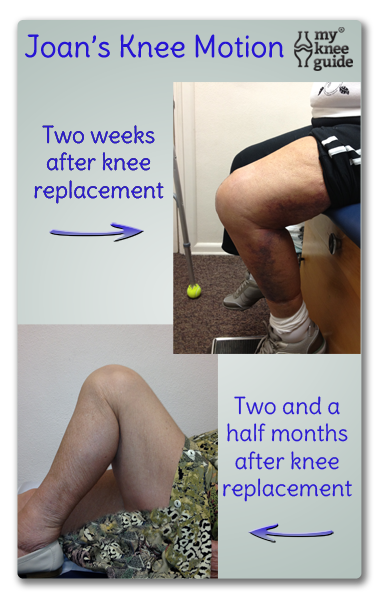 In the first few weeks of recoveryfirst few weeks of recovery, it is important to remember to exercise, iceice, elevate and rest. Obtaining good range of motion will require hard work. It is common to have swellingswelling after surgery which will limit the amount the knee will bend. Some days the knee will feel good, and other days the knee may have more stiffness and pain. During the recovery process, many patients feel as if their knee is taking "2 steps forward followed by 1 step back."

For some people it will take many weeks to establish good motion. It is important to be patient during this process. Slow, steady progress is the norm. Consistent effort by the patient will produce the best results. It is important to avoid severe pain as over doing it can cause more swelling and hinder the progress. The concept of rest, ice, elevation and exercise is so important, it bears repeating.

Following surgery, some surgeons recommend the use of a CPMCPM (continuous passive motion) machine for up to 3 weeks. However, there is a trend for less use of this machine due to studies showing insignificant long term improvements.

Both bending (flexion) and straightening (extension) is important for good results. The knee should bend at least 90 degrees to avoid certain restrictions. Good motion is important for stair climbing, getting up from a chair, squatting and kneeling. Obtaining full extension allows the knee to “lock out.” This will reduce fatigue of the quadriceps musclesquadriceps muscles when standing for a long period of time. It also allows the knee to function more properly during walking.

A pedal exerciser, (mini stationary bike) can be used to increase motion and build strength. This exercise will improve endurance of the quadriceps muscles. If you sit closer to the machine, the knee will be forced into more flexion, thus increasing the range of motion. Once good balance can be maintained, the use of a stationary bicycle can be used. Initially, it may be helpful to keep the seat elevated, then slowly lower the seat to create more knee flexion with each peddle stroke.

Despite hard work, some patients will have stiffness in the knee. There are several options available if the knee motion is not progressing appropriately. The surgeon may recommend a dynamic splintdynamic splint to achieve better flexion or extension. This splint can be controlled by the patient to deliver a constant, forceful stretch or bend to the knee.

If the knee does not bend to 90 degrees, the patient may consider a manipulation under anesthesia (MUA). Approximately, 1.8% of patients may require this procedure due to stiffness. During the manipulation, the orthopaedic surgeonorthopaedic surgeon will apply a slow, forceful bend to the knee with constant pressure until there is a release of the adhesions that are preventing motion. This procedure is generally more successful at increasing flexion rather than obtaining more extension.

A manipulation is usually considered between 6-12 weeks after surgery. This procedure can release the adhesions before they create a permanent contracture causing long term stiffness. Additionally, there is some evidence, from studies, that a later manipulation (after 12 weeks) can still provide some benefit. However, as time progresses the manipulation does become less effective.

Following a manipulation under anesthesia, patients typically maintain their improved motion, with an average gain of 35 degrees as measured 5 years after manipulation.

Alternatively, some surgeons will perform an arthroscopy on a stiff knee if a manipulation is not successful or is not indicated. If significant adhesions are created than the surgeon may also consider opening the knee (arthrotomy) and removing the adhesions. However, this procedure does not have uniform good results.