Infection prevention starts before knee replacement surgeryknee replacement surgery. Surgeons look for signs of infection prior to the procedure with a urine analysis, chest x-ray and blood workurine analysis, chest x-ray and blood work. Cleaning the surgical sight with a chlorhexidine (Hibiclens® Hibiclens®) or an iodine based soap prior to surgery reduces the amount of bacteria on the skin. Surgeons routinely give intravenous antibiotics both before and after surgery. All the instruments and implants are rigorously sterilized before use in the operating room. Sterile technique is closely followed during the procedure. Despite all these and other protocols there is still a 1.5% chance for a deep infection after knee replacement.

Following surgery, observing the woundthe wound carefully can reveal signs of infection. Significant redness may represent a skin infection (cellulitis). A fever over 101 degrees or significant chills may indicate infection. A deeper infection can present with drainage from the wound that has a bad odor or is grayish in color. If the skin edges of the wound start to open and drain that is a poor sign.

There are certain risk factors in patients that are known to increase the chance of developing a post-operative infection. They include prior prolonged steroid usage, rheumatoid arthritisrheumatoid arthritis, diabetes, smokingsmoking, prior surgery, and obesity. 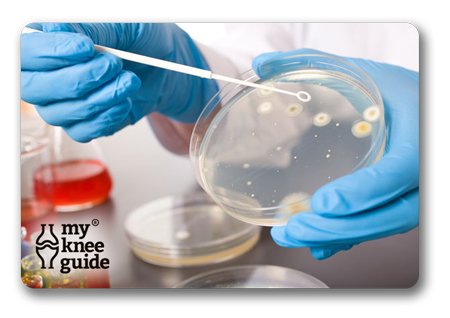 There a several options for the treatment of infection after knee replacement surgery. These options depend on how soon the infection manifests after surgery and the severity of the infection. A simple skin infection (cellulitiscellulitis) can commonly be treated with oral or intravenous antibiotics and close monitoring.

Deeper infections are typically treated based on the time of onset of symptoms and the type of bacteria involved. These infections can be categorized into early and late. An early infection presents within 6 weeks of surgery, and with less than 3 weeks of symptoms. Additionally, an early infection can also show up in a patient who had a previous well functioning knee replacementknee replacement but spontaneously developed symptoms either from a local wound source or from a source that spread from the blood.

Some infections may be easy to diagnose and could be associated with high fevers, wound drainage, redness, severe pain and loss of motion. However, not all infections are obvious and can present with more subtle signs and symptoms. There are several test that an orthopaedic surgeonorthopaedic surgeon may perform to help make the correct diagnosis of infection. These tests include blood draws (CBC, ESR, CRP), retrieval of fluid from the knee joint (aspiration), and imaging (x-ray, CT scan, MRI, or bone scan).

Early deep infections are frequently treated with surgery. A minimally invasive surgery such as an arthroscopy (scope) to wash out the infection has poor results and is usually not performed. The more effective surgery includes re-opening the entire incsion to clean out the knee and change the plastic componentplastic component. This is typically followed by 6 weeks of intravenous antibiotics.

Late deep infections that present after 3 months from surgery, or have more than 3 weeks of symptoms, may be treated with even more aggressive surgery. The most common method is with a "two stage revision." This includes a surgery for removal of the knee replacement and placement of an antibiotic cement spacer. This is followed by treatment with intravenous antibiotics for 6 weeks. Finally, another surgery is performed to reconstruct a new knee. Even with this extensive treatment, there is still a 10% recurrence rate. 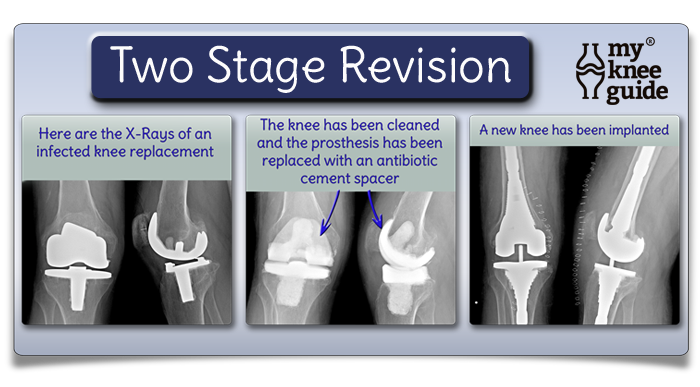 A newer technique is starting to be used which entails the surgeon removing the infected prosthesis, cleaning the knee, and re-implanting a new new knee during a single surgery. This is called a single stage revision. This may be more appropriate for only a select patient population with certain types of infections.